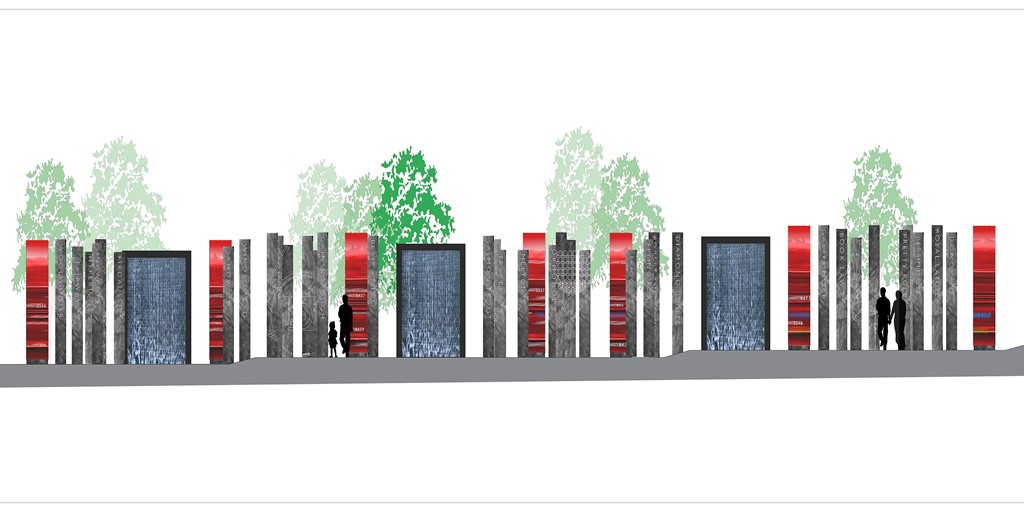 Delighted to announce the details of our latest public art project which forms a key part of the transformation of Doncaster train station forecourt.

Celebrating engineering, speed and connectivity and stretching 40 metres in length the public art will consist of 47 monoliths which are a nod to Doncaster’s past, present and future. With a fountain and three impressive water walls, the art will take centre stage in the new public space as you step out of the train station and head into the town centre.

The concept was devised by Doncaster Council and further developed by Chris. CB Arts are manufacturing and installing the piece. The water features are being supplied by The Fountain Company.

Ros Jones, Mayor of Doncaster, said: “This public art reflects our history and our future and will be a real statement piece when people arrive in Doncaster by train. It celebrates our rich rail and horse racing heritage which are still important for the town today and will be in the future.

“The station forecourt redevelopment will create a superb new gateway into our town centre giving the right impression to visitors and potential investors. It is just one of the many schemes we are delivering from our ambitious Urban Centre Masterplan which are helping deliver jobs and growth for our borough.”

Chris Brammall commented: “I am really proud to be delivering this public art sculpture for the people of Doncaster. The artwork design embraces the history and heritage of locomotive engineering in Doncaster and is a very fitting celebration of the important contribution the town made. The sculpture combines my passion for metalwork, engineering and construction and these elements bring strength and scale in the design. It is something locals can be proud of as well as offering a landmark welcome for visitors arriving into the town.”

Doncaster’s contribution to the age of travel and speed, the quantity of locomotives that The Plant produced and the A3 and A4 locomotives designed by Sir Nigel Gresley who became Chief Mechanical Engineer of the Great Northern Railway (GNR) in 1911 are reflected on 40 monoliths.

The piece recognises the engineering ingenuity and gives a perspective to the volume and scale of locomotives built at Doncaster and the contribution the town made at this important time.

From these 40 monoliths, 28 recognise the locomotives named after St Leger winners as a further celebration of Doncaster’s rich heritage. The names will appear in raised 15mm steel plate mounted vertically on the face of the monolith and set in the same typeface as they were laid out on the actual locomotives.

Material is heavy 40mm steel plate designed to demonstrate the quality and weight of the locomotives and represent the overwhelming scale and size. Each monolith stands proud up to 3.7metres in height. The solid, robust, steel represents the engineering, craft and workmanship associated with building the locomotives in the famous Doncaster plant.

In contrast, seven striking red monoliths sit in between the steel monoliths. They will be screen printed in vitreous enamel to give a quality finish and very glossy depth to the paint – just like looking into the locomotives paint. They represent the sleek design and gloss finish of the A4 locomotives.

These celebrate speed. Each of a different design being a blurred snippet and flash of the world going by when looking out of the window on train journey. Every detail is carefully considered – each number represents one of the A3 or A4 locomotives built in Doncaster and is blurred into the image to give a sense of speed, a flash of colour in the landscape.

The striking red is a nod to the colour of the wheels often used on locomotives. To honour the speed and ingenuity it includes 4472, the number of the Flying Scotsman in its Doncaster green and out in front, the fastest steam locomotive the Mallard in its Garter blue. These sit at the front of the public art piece as a celebration of the engineering and a pinnacle of development of that type of locomotive.

Complementing the monoliths will be three water walls and a fountain. Each water feature will be clad in black granite representing coal, the fuel that powered the locomotives. Coal mining is also an important part of Doncaster’s heritage. Water was used to create the steam that drove the pistons. It all ties together. Water, coal, steel and design equal speed.

The council led redevelopment of the station forecourt is being carried out in partnership with London North Eastern Railway (LNER) and the South Yorkshire Passenger Transport Executive (SYPTE). The scheme will help attract new investment and jobs into Doncaster and the wider region and is benefiting from £7.5 million of Sheffield City Region funding.

Local Enterprise Partnerships are playing a vital role in driving forward economic growth across the country, helping to build a country that works for everyone.

That’s why by 2021 Government will have invested over £12 billion through the Local Growth Fund, allowing LEPs to use their local knowledge to get all areas of the country firing on all cylinders.