Our latest private commission has recently been completed with the installation of a bespoke bench at Windermere Jetty Museum.

Chris was delighted to be approached by our client Affra, who was looking to have a bench designed in memory of her late husband, Bill Hartree.  Bill worked as a volunteer at the old Steam Boat Museum for a number of years post leaving the RAF in 2007 working alongside Adrian Stone but mainly on the boats’ engines.

He was for a number of years, the Flying Display director of the annual Windermere Air Show which was run by The Rotary for 10 years and then for the Show’s final 2 years by Bluestone Events. Other than the annual display by the Red Arrows, one of the other highlights was the display in 2011 by the Vulcan bomber.  Bill was also involved in the Water Bird project which is still on-going.

The bench design draws on a number of elements from a visit to the museum.  Chris wanted to make the bench fluid like the movement of water around the hull of a boat the form cuts through the timbers to enhance this effect. The timbers by contrast are crisp and regimented inspired by the jetties and decking planks used on many of the boats restored at the museum. The bench is usable from all sides which gives the piece much more flexibility. Raised text flows within the piece so it becomes less like a plaque placed on the bench and more integral to the design.

The curved metal plates and frame are finished in our signature patinated lacquer and the timbers are a hardwood stained so the colour is akin to that of the restored boats Bill worked on.

Affra Hartree comments "I am over the moon with Bill’s bench, it is absolutely wonderful and a very fitting tribute to my dear husband. The workmanship and thought that has gone into this project exceeds my expectations and I can’t thank Chris and the craftsmen involved in its creation highly enough." 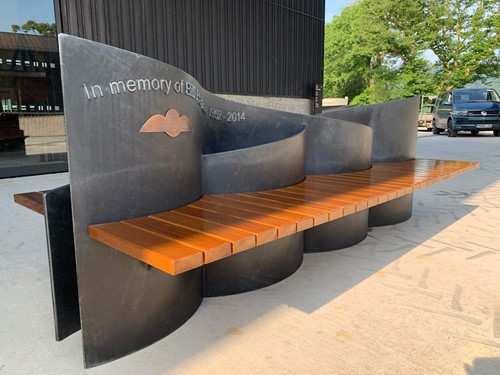 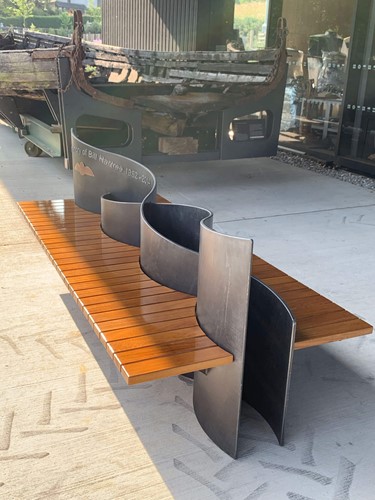 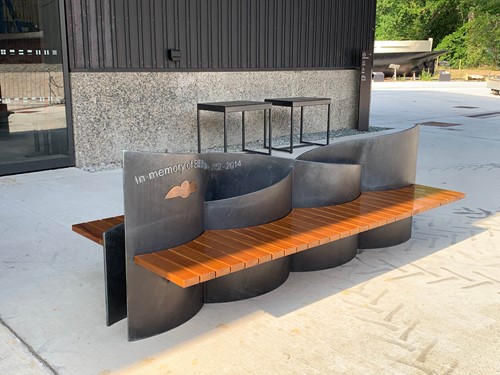